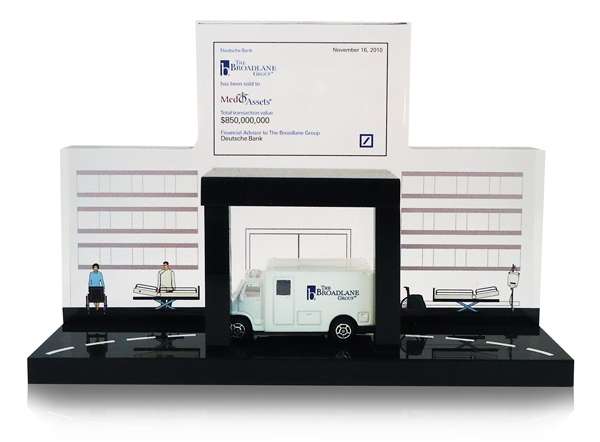 You can avoid choosing the wrong deal toy company. Here are the 7 warning signs that the deal toy company you may be considering (or already using) may not be the right one.

It’s one thing to run a lean operation; it’s another to regularly risk leaving you in the lurch as a result of any number of routine (and predictable) circumstances—vacation days, sick days, family obligations, another bank’s rush job—you name it. If their deal toy company has only, say, two artists or salespeople and one is out of commission, the fallout is going to be pretty predictable. Need something done urgently for your rush job? Don’t worry: the “other” artist or salesperson, whose workload has just abruptly increased by 100%, will be sure to get around to it—just as soon as he’s done dropping off that package at the UPS Store.

2. They’re Not an Approved Vendor

There could be a legitimate reason they’re not approved at your bank, but if turns out you get stuck not only paying for tombstones out of your own pocket, but having to chase down other team members for their share as well, that won’t be much consolation.

On the other hand, it could be that the deal toy company has a lousy reputation—or no reputation. It could also be that they’ve been in business only slightly longer than the average food truck; and while they’re no doubt brimming with ideas and strategies on how you can help them get approved, do you really have time for that?

3. They Don’t Own the Process

Wait, didn’t you and your team just spend an inordinate amount of time and energy putting together a deal? Then why are you stuck taking the lead in the deal toy process? Wasn’t this supposed to be the fun part?

Make no mistake: most deal toy companies are grateful for any preliminary ideas and input you might have. The problem is one of degree.

The creative onus shouldn’t fall entirely—or even mostly—on you and your deal team. Why are you the only source of creative or original ideas on this project? For that matter, why are you the only one keeping tabs on your timeline for the dinner, and trying to move the process along?

4. They Don’t Respond to Your Calls/Emails

This is a classic, first-date danger sign; and if things start off rocky, how likely are they to improve over time?

If your deal toy company isn’t attentive to you at the outset of the process, how available will they make themselves if things were to go wrong? Exactly how long should you wait to find out? Until a snowstorm’s looming and your MD is demanding assurances that the deal gifts arrive in time for your dinner… in Cleveland… tomorrow? Or grilling you on why the piece is not only late but bears no resemblance to the artwork you had passed along?

Disaster doesn’t have to strike for this to become an issue. You’re accountable internally for the tombstone process; what are you going to do if no one’s being accountable to you?

You’re in charge of the deal toy. You finally, at long last, have managed to get a consensus on a design. Everyone, including your MD, is fired up about seeing the designs… And then you get that sheepish message (usually delivered via email or voicemail to avoid a direct exchange) that goes something along the lines of: “I, we, just got pricing for that design you guys really liked. Uh, it looks like we can’t do it within your budget. Sorry, ‘bye”.

Welcome back to Square One. Now you just have to break the news to your deal team.

6. They Don’t Understand and/or Appreciate Your Timeline

“But you didn’t tell me you had a closing dinner!”

These are words you really don’t want to hear.

…and you shouldn’t. So unless you were just informed that the closing dinner is in Kuala Lumpur next Tuesday—in which case you have a rush situation on your hands and there are options that should immediately be laid out for you—your deal toy company should never—ever be blindsided by a deadline. Knowing your deadlines, and when (and where) you may have a closing dinner, should have been a crucial part of logistical planning from the outset (and should, in fact, have shaped the very designs you were shown).

Timing shouldn’t be an afterthought.

Be leery of any deal toy company whose website, marketing materials—or suggested designs—steer you almost exclusively to some pet material.

There’s a strong possibility that their all-purpose solution won’t be the best choice for your tombstone—from either a cost or aesthetic perspective.

David Parry is the Director of Digital Strategy at The Corporate Presence.