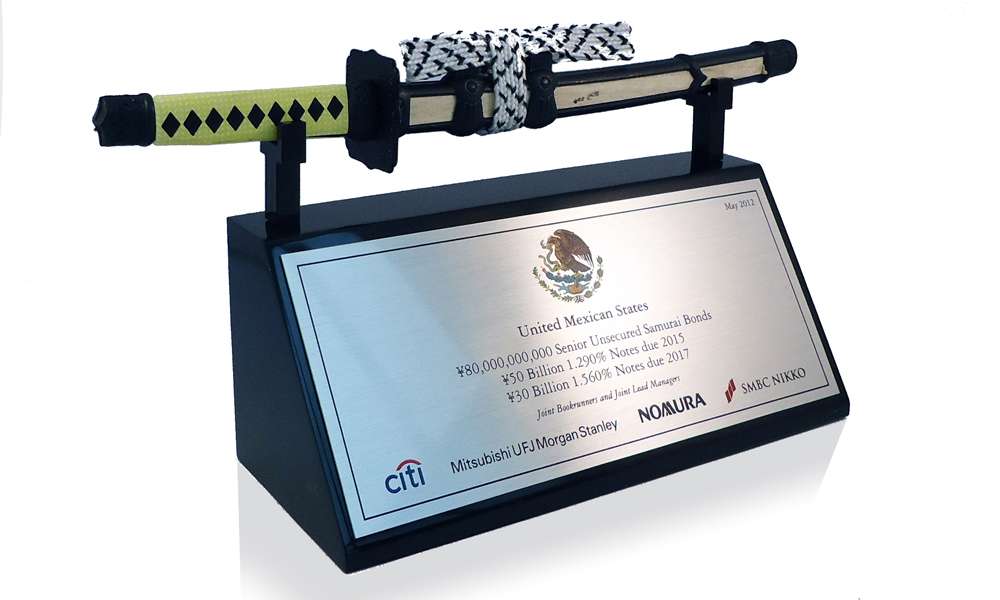 Currency-themed deal toys can play off a variety of creative options, including symbols, nicknames, maps, and flags.

Over the years we’ve designed deal toys reflecting the full spectrum of exotically-named international bonds. These currency-themed tombstones have involved issues (as well as swaps) denominated in another litany of names, including Loonies, Kiwis, Greenbacks—you get the picture.

The gallery below features just a handful of these designs. We hope, however, that it contains enough examples to suggest the range of creative options for currency-related transactions of this sort. Some designs simply (but effectively) showcase a particular coin or paper denomination. Other designs play off a currency symbol, nickname, or any of a number of national themes.

The Jaguar XK8, the model featured in the first two Austin Powers movies, provided the perfect accompaniment to this GBP issue.

Example of a “sandwich” piece in which an object is pressed between two Lucite or crystal plates. The technique is used when the ordinary Lucite baking process would impair the object —such as the coin shown here.

In contrast to the earlier Mexican design shown, the deal toy marking this issue
denominated in Euros successfully incorporated a coin inside the Lucite.

Another design recognizing a Samurai Bond.

The initial design for Euro banknotes was chosen in a competition involving 44 entries, submitted by 29 artists or design teams.

The IFC loan commemorated here was earmarked for the financing of small and medium-sized businesses in Paraguay.

Ernie the Elf, seen here with a wad of Euro notes, has been the brand mascot of  Keebler cookies since 1968.

Ernie the Elf, seen here with a wad of Euro notes, has been the brand mascot of  Keebler cookies since 1968.