Zippers, Shrapnel, Manure…The Weird Things We’ve Had to Embed in Lucite—and the Weirder Science behind Them 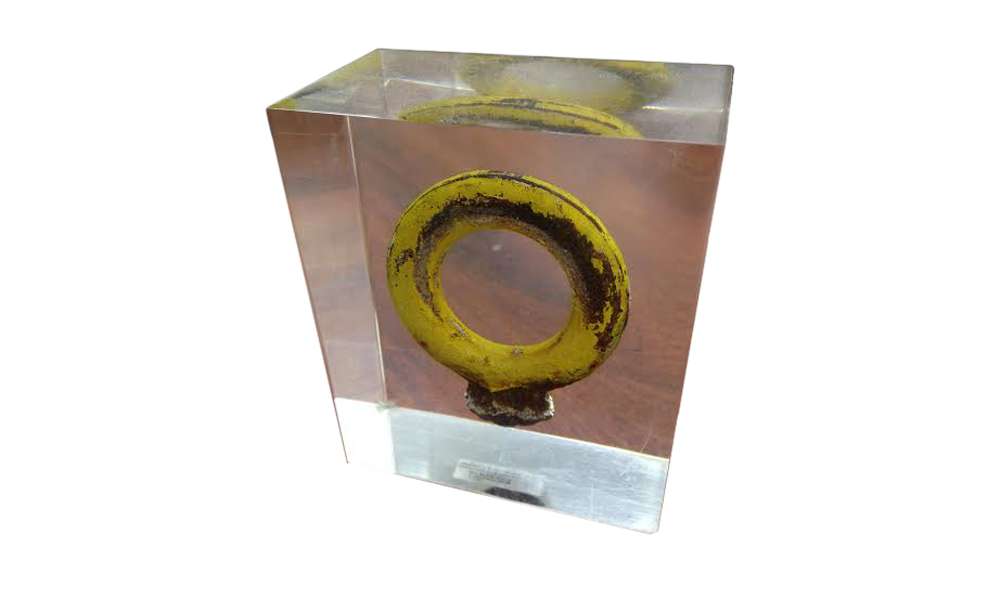 Zippers, shrapnel, moose manure, regurgitated coins, cookies, umbilical cords, teeth—these are just a few of the things that have found their way into our Lucite embedments over the years.

That’s our stated mission here at The Corporate Presence.

And success, as we’ve all heard repeatedly, has many definitions, and can take many forms. Sometimes it may involve pulling off the most profitable deal in history; or hitting a 5-year work anniversary; or surviving a trainee program; or just ….surviving.

…and not just surviving in the figurative sense, but in the more elemental, near-death-experience, can’t-believe-I’m-still-intact kind of sense.

Like the soldier who’d had shrapnel surgically removed from the wound he’d narrowly survived—and now wanted us to embed the fragments in Lucite. Or the client who wanted to embed a corroded bolt—the one that had failed to support the metal plate that had then nearly impaled him.

Embedding the shrapnel worked; as shown here, the bolt came out pretty well too.

And then there’s the guy who wanted us to embed some moose manure…..

That was a slightly different story. That worked too—or, at least, the client seemed pleased.

The Weird Physics of Lucite Embedments: What Works, What Doesn’t

“Not sure how much you want to go into the technical side of this”.

John Hathaway is Creative Director at The Corporate Presence, and his 17-year career has given him exposure to—and almost unequaled insight into— the entire Lucite design and production process.

The baking stage necessary to Lucite production is, John explains, an “exothermic process”, in which objects not only take on heat but emit it as well. This explains how a cookie might conceivably survive the baking process unscathed while a rock doesn’t (a rock can absorb so much heat that it causes the Lucite itself to crack). The intensity of the heat also explains why the rubber wheels of that Hot Wheels car you’d intended to have embedded are sure to melt—and leave the paint job fried.

The Fascination with Lucite Embedments: It’s Not Weird if It’s Your Product

Why does any of this matter? After all, you may not have some oddment (strange or otherwise) that you’re looking to memorialize in Lucite. So why should you care?

Because the item in question—the one you might be considering embedding—might be your—or, more importantly, your client’s product—meaning your client’s cherished product. So knowing whether a piece of coal, or an aircraft engine component, or even a cookie, can successfully embed, and how it’s likely to look, can become very important. Two good examples are shown here— of a embedded spice pod, and of an embedded padlock, a product so closely associated with the client’s service that it was pivotal to the Lucite design.

When it comes to embedding objects, the only generalization that holds is that you frequently need to conduct a test. Because we own a Lucite factory this is something we can do quickly—and, by virtue of our unique access to factory personnel—with a considerable amount of experience and insight into whether, and how, a given embedment might work.

Regardless of what kind of success you’re commemorating, give us a call.

David Parry is the Director of Digital Strategy at The Corporate Presence, which designs and manufactures deal toys, custom awards, and Lucite embedments.

Tips & Tricks
Prev:
Looking for Tech Deal Toy Ideas? He .. Next:
The Missing Moon Rock…and 7 Other B ..
Back to Top
Request a Quote