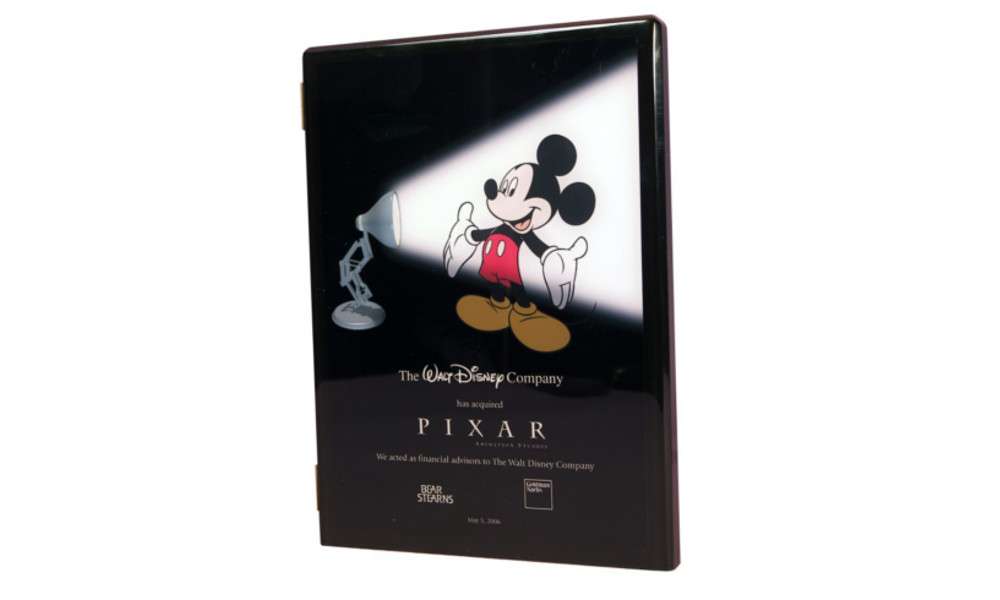 The phrase “investment banking tombstones” tends to conjure up some immediate associations: buttoned-up, drab, and probably most of all, boring.

A lot of that’s undoubtedly due to the word “tombstone”. In just about any context, the word pretty much insures a somber, funereal tone.

Because a lot of the deals represented in investment banking tombstones are anything but boring. That seems a little easier to appreciate when tombstones are referred to by another, even more popular name: “deal toys”.

Whatever exact term is used, tombstones/deal toys—designed to celebrate and commemorate investment banking deals—can have extremely creative and memorable designs.

And sometimes as well, the stories behind deals that they chronicle can be just as fascinating. Below we share the stories behind just a few of the high-profile deals The Corporate Presence has helped commemorate over its 40+-year history. 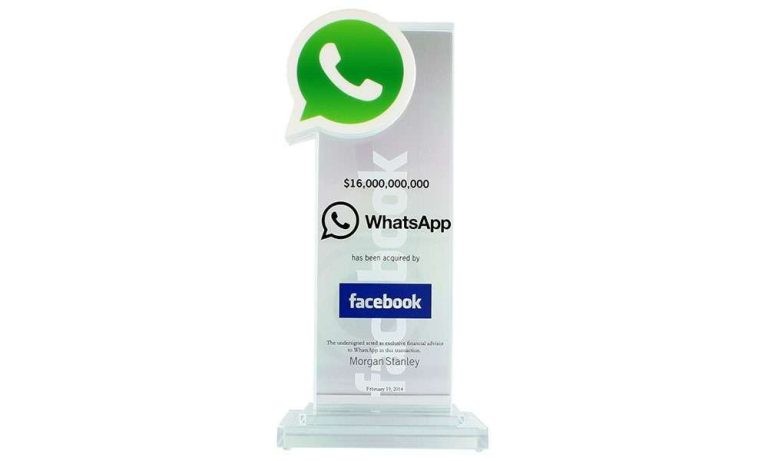 Why was this deal signed at a former food stamps office?

The Tombstone for a Megadeal…Signed at a Food Stamps Office

Facebook’s 2014 acquisition of WhatsApp is a compelling story from a number of perspectives. But it’s hard not to focus on what the deal represented for one of the company’s founders, Jan Koum.

Koum walked away from the acquisition with $3.5 billion from Facebook, a company that, only seven years earlier, had rejected his employment application (as well as that of co-founder Brian Acton).

Koum brought another dramatic touch to the deal when he agreed to the terms.

The sign-off didn’t take place at WhatsApp’s Mountain View, California headquarters. It was performed instead at a building just down the street—one very familiar to the Ukrainian immigrant who came to the U.S. at 16 and whose first job was sweeping the floor at a grocery store. The building had been the headquarters of North County Social Services, where Koun and his mother had once regularly picked up food stamps.

How did you spend your second day on the job? Trying to track down someone in I.T.? Trying to figure out which of your new colleagues secretly swapped out your office chair and stuck you with a broken one?

On October 2, 2005—Day Two in his tenure as Disney CEO—Robert Iger pitched the acquisition of Pixar to the company’s board.

Among other things, the deal made Steve Jobs a Disney director, and also its largest individual stockholder; it also helped appease Roy Disney, a major stockholder, who’d accused the company of abandoning its considerable legacy in animation.

But most of all, the deal was profitable.

Looking back over his years at Disney, Iger would rank the deal his “proudest decision”—even above the acquisitions that brought in Marvel, Lucasfilm, and 20th Century Fox. The animation studio has brought in over $14.7 billion in global box office, with about $11.5 billion of that coming after the Disney deal.

The megadeal stolen in the dead of a New York City night.

The Tombstone from the Stolen Deal

Capturing all the highs and lows of this deal’s saga—across two continents and multiple time zones– might be beyond the reach of a mere tombstone. You might have to resort to Kabuki, interpretive dance, or even opera for that.

That said, you can get a sense of some of the raw emotions involved in the above tombstone’s playful reference to the dashed (here literally squashed) dreams and expectations of one of the parties to the deal.

And it was a 41 billion-dollar deal.

The turning point came when a group of defeated bankers at a late-night, cry-in-your-beer outing at a three-star Michelin restaurant in Manhattan got a call to arms from several of their clients—and a flanking plan was hatched.

To get the full story on all the machinations that occurred, in London and New York, on that early morning in February, 2004, check out our account of the purloined deal and its tombstone.

Protecting Us from that Lousy, Two-Bit Stock

Over its storied history, our nation has looked to the state of Massachusetts for a number of things.

In 1980, unfortunately, stock-picking wasn’t one of them.

And with that, the initial public offering of Apple, one of a number of landmark IPO tombstones we’ve handled over the years, was dismissed as “too risky”.

The Tombstone from the Best Deal…Ever?

But patience and discipline were two qualities that enabled Blackstone to salvage what looked like a horrendously bad deal.

The timing, for one thing, couldn’t have been worse. Blackstone closed its $26 billion buyout of Hilton Hotels just before the 2008 financial crisis, which not only did in two other deal participants (Bear Stearns and Lehman Brothers) but led to the involvement of the New York Fed and litigation with a rival hotel firm.

“Heartbreak Hotel” and “Not So ‘Suite’ Deal” were just two gleefully dismissive headlines for the deal’s epitaph.

But Blackstone managed to turn things around—to say the least.

Read more about Blackstone’s turnaround strategy in the Hilton deal—as well as the tombstone we designed.

Whatever the story is behind your particular deal, big or small, The Corporate Presence can provide you with the same service and expertise we’ve been offering investment banking and other financial clients for over 40 years. Reach out to us and get the tombstone design process started.